Fully qualified members of the Association of Scottish Toastmasters that abide by a strict code of conduct.

We have had the pleasure of hosting many weddings & events over the last 20 years for many satisfied clients.

We provide peace of mind to our clients knowing that their special event is in safe hands with a professional Toastmaster. 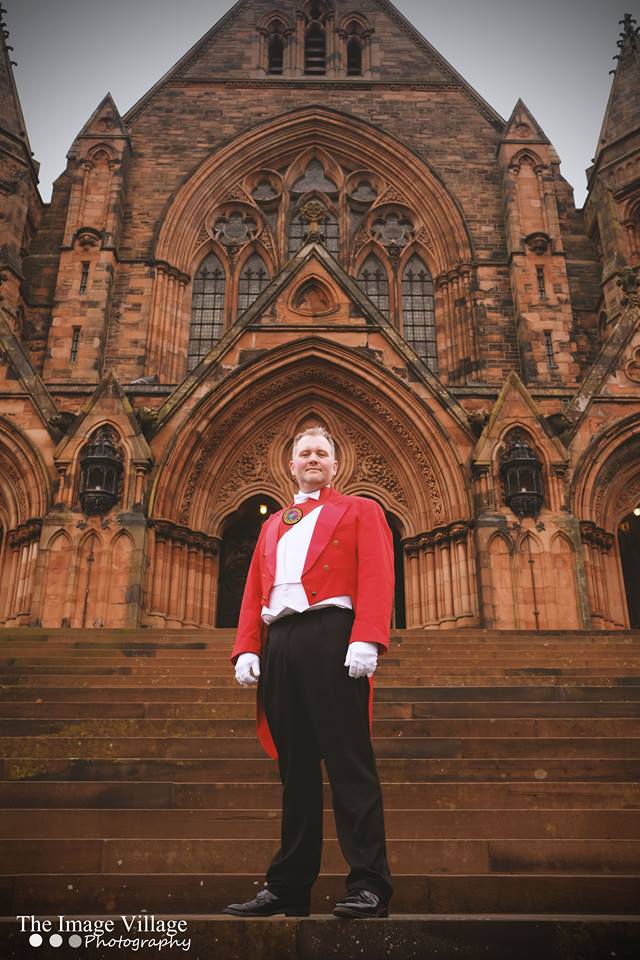 With over 20 years experience in weddings, corporate events  and entertainment, we are well suited to make sure that your event is as stress free and as well organised as it can be. We can help guide you through all the formalities and by using my event planning experience will make sure that your event runs smoothly and professionally leaving you to actually enjoy your special day and not have to worry about who is doing what

We treat every wedding as a one off which guarantees you an exceptional service with excellent advice presented in a professional manner. Whilst the role of a Toastmaster is steeped in tradition, we also bring a fresh, modern approach to customer service and the role of Toastmaster or “Master of Ceremony”. I am flexible enough to ensure that your dreams are turned into reality. After all, it’s your special occasion and we are here to help make it memorable.

What is a Toastmaster?

The art of Toastmastering can be traced as far back as Hebrew times, and to the practices of the Greeks and Roman of offering toasts to their many gods and heroes.

During the reign of King Charles 11, it was customary to drop pieces of spiced toast into wine to wine to improve its flavour, and by the 17th century the”Toasting” of friends and important guests at banquets had become very popular.

The origins of Toastmastering as we know it today, are to be found in the 19th century, when private clubs began to appoint a member to act as a Master of Ceremonies.

Stuart would be considered a modern day Toastmaster with the accent on humour and informality.

Stuart is a skilled communicator, organiser and consultant, available for any type of function, who has a genuine love in making your event both pleasurable and memorable.

With a passion for weddings, Stuart will work seamlessly with the wedding coordinator and any other vendors on your day to make sure that your day runs perfectly. 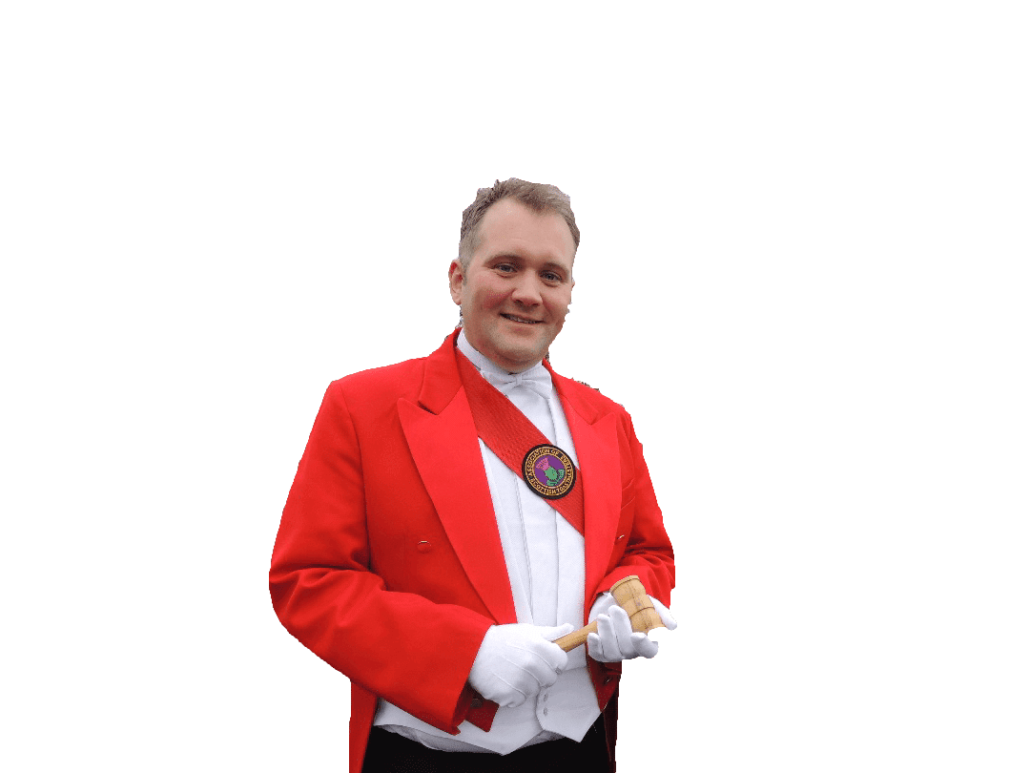 After all the planning and preparations, you’ll want your Wedding Reception to run smoothly, and that’s where a Professional Toastmaster will be of great benefit.

With a wealth of experience, our Toastmasters will co-ordinate the entire event, and also resolve any minor problems.
Our Toastmasters liaise with everyone involved to ensure the day is run exactly as you wish.

From the arrival of Guests to the first dance, your Toastmaster will ∼

Your Toastmaster will perform many additional duties, including ∼

Even before your Big Day, your Toastmaster can offer advice on timings, speeches, etiquette, and will be only too happy to discuss your plans in detail.

The Toastmaster’s traditional uniform, complete with red tail-coat, adds an extra splash of colour to the occasion.

Coupled with professional conduct, tact and expertise, your Wedding Reception will be in safe and reliable hands.

A fantastic addition to have at your corporate event, the Scottish Toastmaster duties include:

Guiding shareholders and Press to registration and seating, calling to order and starting the meeting on time, introducing the chairman and directors, moderating shareholder questions and answers, supervising hospitality.

Managing all formalities, guiding guests to the reception area and inviting them to be seated, introducing and seating the VIPs and speakers, reading award citations, cueing the entertainment

Receiving guests, introducing the hosts and speakers, commentating on the progress of the event, running fundraising such as raffles, competitions, silent or live auctions

Don’t we just love to dress up, celebrate and recognise achievement? The Scottish Toastmaster is available as the official Toastmaster starting with a receiving line or as the less-formal Master of Ceremonies or Game Show host for a wide variety of social gatherings among guests with a shared interest. Here are just some of the ways we can be useful:

Welcoming, guiding and seating the guests, acting as event host and “This is Your Life” presenter

Scene-setting for the audience, explaining fundraising mechanics, cueing the entertainment, acting as Voice of God, raffle or prize caller or auctioneer

Receiving guests, introducing them to the hosts, processing in with the head table, calling the speakers, proposing the toasts

Thank you so much for making our wedding such a wonderful experience and keeping us calm and reassured even under the most stressful of times for us.

You gave it a sense of occasion and made both of us feel so so special. From the first meeting with you, Gayle was at ease and felt reassured that the day would run without hitch. Thank you so much.

A huge thank you for last night. Our client was absolutely thrilled with the content and atmosphere of the evening and your skill, professionalism and excellent good humour throughout were key to achieving this. I do hope that we find an opportunity to work with you again.

Most frequent questions and answers

What does a Toastmaster do at a wedding?

The duty of the Scottish Toastmaster is to take away the stress from the families, especially the Bride and Bridegroom. by working closely with you,the venue and all the other wedding professionals involved your  wedding. We make sure that there are no hiccups during your wedding and that you have a fantastic day with lots of smiles and lifelong memories of your wedding.

Why are Toastmasters popular at weddings?

Your wedding is something you have probably dreamt about and you want it to be as stress-free as possible and to enjoy the occasion and be able remember the little things that made your wedding ‘Special’. The Scottish Toastmaster is there to ensure the reception runs smoothly and to time, at the same time adding a touch of class to the occasion, more importantly we are there to try and make your wedding dreams come true!

Who is the Association of Scottish Toastmasters?

The Association of Scottish Toastmasters which is the only organisation representing professional Toastmasters working in Scotland, was founded in the millennium year.

Not anyone can claim to a member as all members have to pass an examination in front of a panel to gain entry.

The following year the Association of Scottish Toastmasters was officially launched on 21st March.

A ceremony to mark the occasion was held in rooms adjacent to the Scottish Parliament and was attended by the patron The Rt Hon Lord Steel of Aikwood who presented each member with their distinctive ‘millennium tartan’ sash and certificate of enrolment.

The Association of Scottish Toastmasters was born from a desire to maintain standards of service and to raise and promote the profile of professional Toastmasters working in Scotland.

The association members, who have over one hundred years of experience between them, officiate at Royal and State occasions, weddings, banquets, dinners and many other formal and informal functions.

Members of The Association of Scottish Toastmasters firmly believe that they bring a sense of unobtrusive dignity and efficiency to any event – at any location.

What do Toastmasters wear?

The Scottish Toastmaster will wear the recognised uniform of the Association of Scottish Toastmasters – a red long tailed coat, starched fronted white dress shirt, white bow tie and a starched white waistcoat, white gloves, black military style dress suit trousers and black patent leather shoes as well as the emblem of the association. He strikes an imposing figure of authority who is there to make sure that all your plans run as smoothly as possible.

Do you attend the church or civil ceremony?

Once you have engaged our services, The Scottish Toastmaster is at your disposal. If you would like your Toastmaster to be at the church or civil ceremony to help organise everything and add a bit of pomp & ceremony then he’ll be there! and then you can decide ok?

The Hotel says they have a Toastmaster service, do we need you?

It may be that the hotel/venue provide a member of staff, if so, ask what they will be wearing ask if he/she will announce your receiving line, be at the Church to help fit buttonholes etc, in fact any of the duties that a Professional Toastmaster can & will perform.

You can then decide whether or not you want a Professional Wedding Toastmaster for your special day.

How long will you stay at our wedding?

Our duties are normally completed at end of the wedding breakfast formalities. We can discuss any alternative plans during our meeting

What is a receiving line and should I have one?

Traditionally it is where all the wedding guests, some of whom may never have met the hosts, are formally announced by your Toastmaster to the parents of the Bride and Bridegroom  who are the hosts and of course the Bride and Groom.

What is the order of the receiving line?

write us a massage 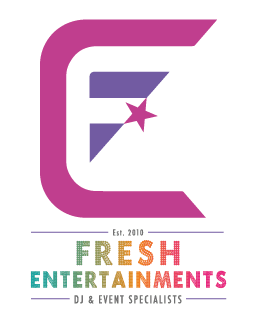